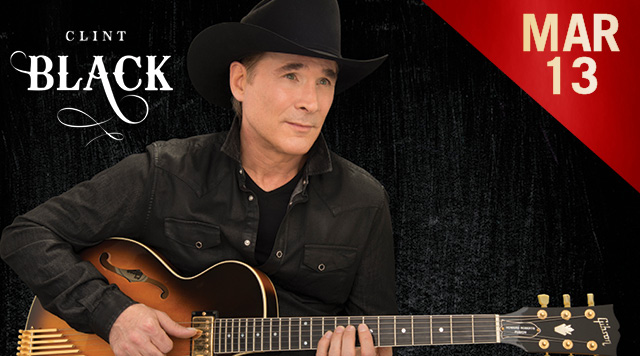 Black burst into the country music scene with the debut of his 1989 album “Killin’ Time.” The album produced four No. 1 singles, including “A Better Man,” “Nobody’s Home,” “Killin’ Time” and “Walkin’ Away.” That same year, the album received the Academy of Country Music Award for Album of the Year, and Black was named Top Male Vocalist. He continued his success into the 1990s and 2000s, recording 22 chart-topping singles, including “A Good Run of Bad Luck,” “Loving Blind,” “When I Said I Do” and “Where Are You Now.”
Throughout his musical career, Black has sold more than 20 million records worldwide, earned more than a dozen gold and platinum awards in both the U.S. and Canada, and landed nearly two dozen major awards and nominations. He also received a star on the Hollywood Walk of Fame in 1996.
Black has enjoyed success outside of the world of country music, having appeared in the feature films “Maverick,” “Going Home,” “Anger Management” and “Flicka 2.” He’s also made television appearances on “The Larry Sanders Show” and “Las Vegas.”
The show begins at 8:00 p.m. Tickets go on sale Saturday, December 7. Tickets start at $30 and can be purchased at www.kansasstarcasino.com/entertain/arena. This is an-all ages show.
Cost:
Tickets from $30.00 plus taxes and convenience fees

Entertainment schedule subject to change without notice.This is an all ages event. Children younger than two (2) years of age do not require a ticket if held on the lap of an accompanying adult.