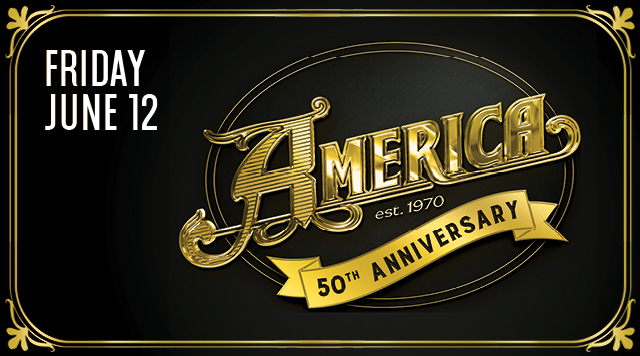 The year 2020 marks the 50th Anniversary of when the classic rock band burst into the music scene. Founding members, Gerry Bleckley and Dewey Bunnell, met in high school in London in the late 1960s and quickly harmonized their way to the top of the carts on the strength of their signature song, “A Horse With No Name.”
America is best-known for their top hits, including "I Need You," "Ventura Highway," "Don't Cross The River," "Tin Man," "Lonely People," and "Sister Golden Hair." Throughout the band’s career, America has also released six certified gold albums, platinum albums, a greatest hits collection and sold more than four million records. In 1972, the band won a Grammy Award for Best New Artist.
Doors open at 6:30 p.m. and the show begins at 7:30 p.m. Tickets on sale now! Tickets start at $30 and can be purchased at www.kansasstarcasino.com/entertain/arena. This is an all-ages show. For more information on America, visit www.venturahighway.com.
Cost:
Tickets from $30 plus taxes and convenience fees

Entertainment schedule subject to change without notice.This is an all ages event. Children younger than two (2) years of age do not require a ticket if held on the lap of an accompanying adult.